My name is Karen Brogan and I live in Oak Lawn / Illinois with my husband and our three children.

Our youngest son, Marty, was diagnosed with stage IV cancer (Rhabdomyosarcoma) at age of 4 on January 12, 2017.  This is the last stage in the progression of cancer. This was a huge shock to our family.

Several weeks after Marty's diagnosis, we heard that a priest by the name of Father Ubald was coming to the nearby parish of St. Gerald's to say a Mass with prayers for healing.  My whole family, including my mom JoAnn, dad Mark, my sister Lori and my brother Kevin, went to Father Ubald's healing Mass.  The Mass was a typical Mass, but the best part was when Father Ubald shared his dramatic life story of how he survived the genocide in Rwanda and how, with God's help, he was able to forgive the people who had killed more than 80 members of his family.

Father Ubald spoke about how we too must become willing to forgive others just like Jesus forgives us, and having real faith in Jesus.  I remember Father Ubald clearly saying you can’t just pray once or go to mass once and think that your prayers will be answered.  Rather, you have to commit to Jesus and your faith.  Jesus wants to meet you in the Eucharist, you must seek His nearness. You have to attend mass and participate, sing and respond with all your heart.

At the end of the healing Mass, Father Ubald walked through the rows of people present with the monstrance and blessed them.

Father Ubald has been given the gift by God that during his services people are always healed in body and soul. In doing so, he learns within himself what illnesses God has healed during the Mass. This time too, after the healing Mass, Father Ubald announced who had been healed that night.  He enumerated different diseases and said, "You are healed."  It was amazing to see how many people testified to their healing.  There were also many people present who told how they had once before participated in a healing service by Father Ubald. They would have then gone to the doctor afterwards to get confirmation that they had indeed been healed.

Marty's diagnosis was not mentioned by Father Ubald that evening, which was heartbreaking. I had hoped that Father Ubald would also say to Marty that he was cured. But I suddenly knew after that service how to help Marty, and that was by praying as I had never prayed before.

I was raised catholic and attended a catholic grammar school and high school.  As I got older I went to mass sometimes.  I believed in God but didn't really have anything to pray for.  My life seemed to be simple and my faith took a backseat sadly.

After that night of Fr. Ubald's healing mass, my faith journey began.  I listened to what Father Ubald said and prayed like I had never prayed before.  I went to mass a few times a week and I sang and participated, I said the rosary every day and volunteered at an adoration chapel weekly where I would pray to Jesus. I attended Holy Days of Obligation and we even had the chance to meet Fr. Ubald again and have lunch with him and attend a few more of his healing masses.

Exactly one year after Marty was diagnosed with cancer, we learned on January 12, 2018 that Marty was in remission. 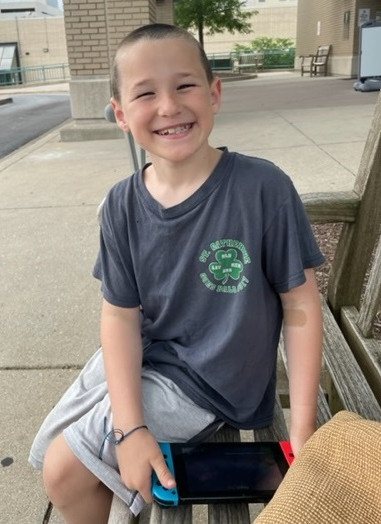 We know that Marty was healed from cancer because of the power of prayer.  Meeting Father Ubald was one of the best things that have ever happened to our family.  Father Ubald was instrumental in guiding us back to our faith and leading us to Jesus.  For that we are forever grateful to him.

Marty is now 4 1/2 years cancer free and we know that God has answered our prayer and Marty can be healthy because of it.

I would say the experience with Father Ubald changed me, my mom JoAnn and my son Marty the most. We truly believe that God answers trustful prayer and know that nothing is impossible for Jesus. We still rely on our faith today and it has gotten us through many hard times.  Marty knows that Jesus healed him, and knows that he as well as his mother has a job to let the world know that Jesus is real and if you believe you shall receive the Lord's blessings.

Father Ubald was a native of Rwanda. In 1963, his father and uncle were murdered by radical Hutus. This was a catalyst for his later strong commitment to forgiveness and reconciliation in his priestly ministry. Then, in 1994, when a total of 85 members from his family, including his mother, were killed during the genocide against the Tutsis, he was once again ready to forgive the killers of his relatives. His example and his priestly work led to an unexpected wave of reconciliation between the victims and perpetrators in Rwanda. In the course of his reconciliation celebrations and services, there were many spontaneous healings, often of the most serious infirmities, and God gave Father Ubald the gift of inner sight as to who of the persons present had been healed by God (see also the testimony: "God healed severe spiritual wounds from the genocide in Rwanda and subsequently gave many physical healings" and "Healed from ulcerative colitis at a healing service"). An extraordinary number of providences also occurred in his environment (see, for example, "God filled my empty hands again and again to help people in Rwanda" and "Examples of how God has intervened and helped in our aid projects in Rwanda"). Father Ubald passed away in 2021.

Registered in the Austrian Register of Associations with the ZVR number: 1460027381

Responsible for the content: Mag.Dr.Dr. Wolfgang Reichelt (chairman of the association)

This homepage is operated from Austria and is subject only to Austrian law. Users outside Austria use this homepage on their own responsibility. Each user is personally responsible for ensuring that this website complies with the relevant national law and for using it in accordance with this.

The contents of our pages have been prepared with the greatest care. However, we cannot assume any liability for the correctness, completeness and topicality of the contents.

As the operator of this website, we are responsible for our own content on these pages in accordance with general laws. However, as the operator of this digital information platform, we are not obliged to monitor transmitted or stored third-party information or to investigate circumstances that indicate illegal activity. Obligations to remove or block the use of information in accordance with general laws remain unaffected by this. However, liability in this regard is only possible from the point in time at which a concrete infringement of the law becomes known. If we become aware of any such infringements, we will remove the relevant content immediately.

This website contains occasional links to external websites of third parties over whose content we have no influence. Therefore, we do not assume any liability for such external content. The respective provider or operator of the pages is solely responsible for the content of the linked pages.

The linked pages were checked for possible legal violations at the time of linking. Illegal contents were not identifiable at the time of linking. However, permanent monitoring of the content of the linked pages is not reasonable without concrete indications of a legal violation. Such links will be removed immediately if infringements of the law become known.

The contents and works created by the site operators on these pages are subject to Austrian copyright law. Contributions by third parties are marked as such. The reproduction, distribution and any kind of exploitation outside the limits of copyright, require the written consent of the respective author or creator. To protect the personal rights of the authors (testimonial providers), direct contact with them is not possible. This can only be arranged through the persons responsible for the website, whereby only the arrangement, but not the establishment of a contact or a consent for a use beyond the limits of copyright can be promised.

Downloads and local copies of this site are permitted for private use only, not for commercial use.

Thank you for your interest in our website. The protection of your privacy is very important to us. Below are details of how we handle your data:

You can visit our website without providing any personal information. We only store access data in so-called server log files, such as the name of the requested file, the date and time of the request, the amount of data transferred and the requesting provider. This data is evaluated exclusively to ensure trouble-free operation of the site and to improve our services and does not allow us to draw any conclusions about your person.

In order to make visiting our website more attractive and to enable the use of certain functions, we use so-called cookies on various pages. These are small text files that are stored on your terminal device. The cookies we use can be divided into three categories: Basic cookies which are essential to the functionality of the website (session management, security mechanisms), Performance cookies are used to analyse user behaviour on the website - Google Analytics is used for this. Targeting cookies are used by third-party providers whose functions we use (e.g. Youtube). With these cookies it is possible to create user profiles that work across pages.

You can set your browser in such a way that you are informed about the setting of cookies and can decide individually about the acceptance or exclusion of cookies for certain cases or in general.

Use of Google Analytics for web analysis

This website uses Google Analytics, a web analytics service provided by Google, Inc. (www.google.de). Google Analytics uses "cookies", which are text files placed on your computer, to help the website analyse how users use the site. The information generated by the cookie about your use of this website is usually transmitted to a Google server in the USA and stored there. This website uses IP anonymisation.  Your IP address will be shortened by Google before transmission within Member States of the European Union or in other contracting states to the Agreement on the European Economic Area. Only in exceptional cases will the full IP address be transmitted to a Google server in the USA and shortened there. On behalf of the operator of this website, Google will use this information for the purpose of evaluating your use of the website, compiling reports on website activity and providing other services relating to website activity and internet usage to the website operator. The IP address transmitted by your browser as part of Google Analytics will not be merged with other Google data. You may refuse the use of cookies by selecting the appropriate settings on your browser, however please note that if you do this you may not be able to use the full functionality of this website.

Furthermore, you can prevent the collection of the data generated by the cookie and related to your use of the website (incl. your IP address) to Google as well as the processing of this data by Google by rejecting the storage of performance cookies.

Alternatively, you can download and install the browser plugin available at the following link: https://tools.google.com/dlpage/gaoptout?hl=en.

You have a right to free information about the data we have stored about you and, if applicable, a right to have this data corrected, blocked or deleted. If you have any questions about the collection, processing or use of your personal data, or if you wish to request information, correction, blocking or deletion of data, as well as revocation of consent given or objection to a particular use of data, please contact us directly using the contact details in our imprint.